If you are a homeowner in the woods or you occasionally engage in light logging activity, you will require a handy lightweight chainsaw that is easy to maintain and would not require you to break the bank for it. Professional heavy-duty chainsaws are quite expensive and require frequent maintenance to keep them going non-stop.

So for a small homeowner, professional chainsaws might not cut it. Not to worry, there are chainsaws perfect for small homeowners which are pocket friendly, lightweight and easy to maintain.

In this article, we shall be taking a look at two of such homeowner chainsaws – The Husqvarna 130 and the Husqvarna 135 chainsaws, and see if we can help you choose between the both of them.

The Husqvarna Story – How It All Began

Husqvarna was founded in 1689 near Huskvarna, Sweden. The name of the company was coined from the town where it started. The company’s first line of production was the rifle, muskets to be specific. Later on, in the 19th century, they began production of bicycles and stepped up much later in 1903 to start producing motorcycles[1] which they still produce till this day.

The first chainsaw to ever be made in the early 20th century was a large, heavy-duty water-cooled machine which required two people to operate it for it to be used successfully. It was dangerous to use considering its size, however, it became a necessity for loggers and foresters to use in felling trees and maintain parks. They still needed to use axes to chop tree limbs off as this chainsaw could not do that job.

In the year 1959, Husqvarna introduced its first chainsaw and upgraded the model to the model 70 in 1962 which was light enough to chop tree limbs off alongside doing a great job of felling trees. In 1970, Husqvarna started producing chainsaws to cater for Professionals as well as occasional users, small homeowners, and ranchers.

Since then up till now, Husqvarna has kept on growing the brand and producing top chainsaws, and other garden tools like line trimmers, blowers among others making them a top name in the garden tools and power tools market.

What Is In The Engine? 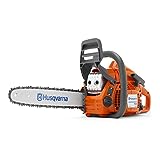 According to Husqvarna, the secret behind the X-Tor technology is that it uses double flushing channels – one for the passage of clean air and the other for the combination of fuel and air in the engine. How it works is that burnt gas is flushed out via one passageway after which the mixture of air and fuel is received into the engine.

With the X-Torq technology, the consumption of fuel by the engine is limited to 20 % while gaseous emissions are cut down to 60 %.

How Light Are Both Chainsaws?

What Are The Lubrication Specifications?

They both have slight differences in their chain speed which plays a great role in their cutting speed. The chain speed at max power of the Husqvarna 130 clocks in at 16.8 m/s, while its chain speed at 133% of max engine power speed clocks at 22.3 m/s.

The Noise And Vibration Levels On Both Chainsaws

What Other Features Do They Have In Common?

What Safety Features Are Present In The Husqvarna 130 And 135?

The brake pad traps the chain and immediately halts rotation of the saw chain. When the chain brake system is activated, the saw chain does not move even when the throttle lever is triggered by the operator.

When you talk about Husqvarna, you are talking about quality and durability. The durability of their garden and power tools is what has kept them relevant and a major player in the garden tools and power tools production industry. Ever since they made their first chainsaw in the year 1959, they have kept on improving and fine-tuning their chainsaws and other garden tools to absolute premium quality.

Having said that, the fact that both chainsaws are durable does not mean you should not practice proper maintenance of the chainsaws. Change the oil filter when you ought to and regular check parts of the engine that need to be cleaned or replaced. Else, you will wear out and damage your chainsaw prematurely.

Are They Pocket Friendly?

The Husqvarna 135 is often a tad more expensive than the 130. The beauty of Husqvarna products especially their chainsaws is the fact that they are easy to purchase, even from the comfort of your home.

Reasonable Warranty Or Not?

The Husqvarna 130 and the Husqvarna 135 share a ton of similarities. In fact, at first look and consideration, you might think they are the same product. However, as considered in this article, we have broken down what makes one distinct from the other.

The price should not be an issue as it is worth every penny. You getter better performance, a light weighted machine and easy maintenance of the machine.

So, if you ask me, I would advise you to get the Husqvarna 135 chainsaw. 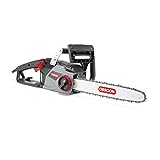 BestChainsaws.UK is a participant in the Amazon Services LLC Associates Program, an affiliate advertising program designed to provide a means for sites to earn advertising fees by advertising and linking to Amazon.co.uk